One thing I didn’t know before I went there: Angkor Wat refers only to the central temple of the whole temple complex. As far as anyone knows, Angkor Wat itself has been in continuous use since it was built in the 12th century. Surrounding it are numerous other temples which were abandoned and later restored.

While Angkor Wat was built as a Hindu temple, Bayon temple has Buddhist origins. It rises up as a wall of 216 eerily serene faces. On every tower, a face looks out in each of the four directions. 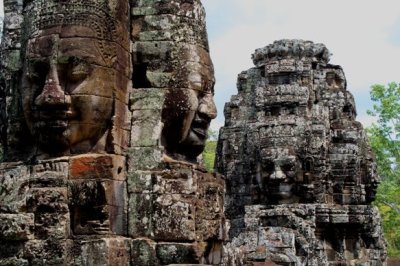 Peek around any corner and you’ll be confronted by that wispy all-knowing smile. Some say the face is modeled after the bodhisattva Lokesvara; some say it is the face of the king who built the temple, Jayavarman VII. Others say it’s both.

The inner chambers are like a maze, having been built and rebuilt over the centuries to suit different kings. Little altars are scattered inside and out, where you can light a joss stick and make a small donation. 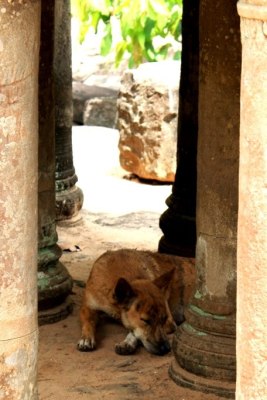 All around the outskirts of the building are little extra bits of temple, some of which make a nice dog-sized shelter on a blazing hot day.

I am a nonprofit communicator, Red Sox fan and amateur streetfoodologist. Once upon a time I worked for the Jakarta Globe & Jakarta Post. View all posts by Trish Anderton