I got sent to Manila for a conference last week. It was my first ‘new’ country in almost two years, and it filled me with the kind of exploratory thrill that inspires blogging.

“Manila is just like Jakarta,” people will tell you. But to me everything seemed different. For example, would a conference in Jakarta start with a 2 minute video praising Jesus and asking for His guidance in understanding Search Engine Marketing? No! No, it would not! And would a Jakarta hotel room have a Fold-Out Gospel Card? I rest my case.

The conference was in Makati, an upscale neighborhood plunked on top of a former swamp by the Ayalas, one of Manila’s leading families. It has parks and outdoor cafes and enclosed pedestrian walkways. 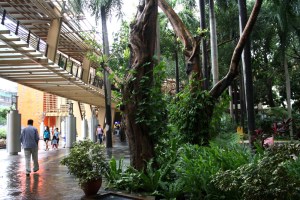 Another thing people will tell you is that Makati is yuppie and fake. But I loved it. The air was breathable (they must have emissions laws). People didn’t smoke in the restaurants. There were sidewalks and bookstores and little Vietnamese noodle shops. Everything looked clean and bright and cheery. After you’ve stewed in Jakarta’s aggressively unvarnished reality for a few years, a little yuppie fakiness feels like paradise.

There was this one little hitch: the SuperTyphoon of the Century was bearing down on Manila, which was still soggy and exhausted from a devastating storm the week before. I had Saturday free to wander around, but I didn’t stray very far because everyone was waiting for the storm to hit. Instead I just walked around Makati, ate interesting food, and took pictures of the rain.

Magically, Saturday night, the typhoon weakened and veered off, sparing Manila. It still did some damage, but far less than feared. On Sunday the sun even made some tentative appearances over the city. Maybe the Almighty decided to take an interest in storms instead of search engines after all.