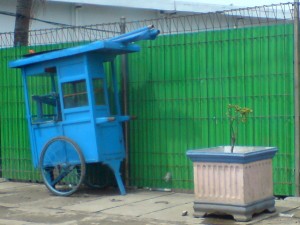 as photographed through a taxi window in north Jakarta.

“Sugar-frosted bunny poops,” my friend and coworker Howard dubbed these. In fact they are little chewy jellies of tamarind, the supersour fruit much loved by Indonesian and Indian cooks. 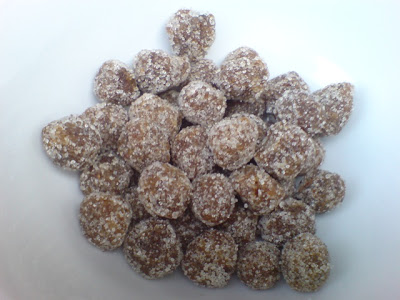 I thought these were going to be chocolate-based, so I was glad I asked before popping the first one in my mouth. They were pretty tasty, though — tangy and sweet and fruity, and they don’t stick to your teeth like a jellybean or gummi bear.

Our neighbors had a baby-naming ceremony over the weekend and invited us to stop by. It was a half-day affair that mostly consisted of praying, so we weren’t really expected to stick around for the whole thing. In fact, most of the neighborhood seemed to be wandering by to stand around, listen to the prayers and drumming, and congratulate the proud parents.

The hosts set up a little sound system in front of the house and hired a group from the neighborhood. I thought they were quite good.

Let me know if you have problems with the video; I can’t get it to play back properly, but our internet is really bad at the moment.

The music may have been done by men, but the ceremony was clearly for the women. A large number of female relatives had been brought in from a remote location, and they occupied the front room of the house, looking very sparkly in their best headscarves. Sometimes they listened to the music and prayers that were happening out front, and sometimes they had their own prayers, led by a woman.

Apparently the highlight of the ceremony is when a lock of the baby’s hair is cut. Tragically, I missed this part. I was told it wouldn’t happen for another twenty minutes, so I scampered home to get another memory card, and when I got back it was over. It’s one of the few times I can think of when something happened ahead of schedule here. 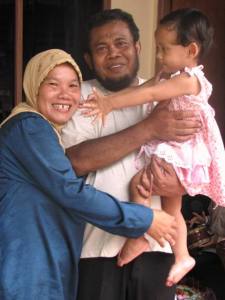 I did manage to snap a nice picture of parents and baby, though. 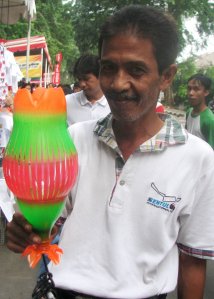 There was a street fair around the corner from us today, and this guy was selling lamps made out of 2-liter Coke bottles. Pretty groovy!

When some friends began talking about trying “fire therapy,” I knew it was only a matter of time before I’d be watching Chad get set ablaze. 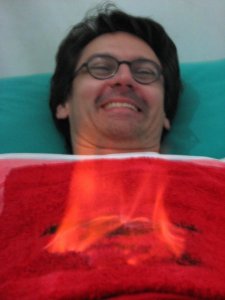 Sure enough, we ended up doing it a few weeks ago, at the acupuncturist’s around the corner. The fire part was actually the culmination of a series of steps. First there was the belly massage, which according to Chad felt partly ticklish and partly weird. Our friend Dave seemed to find his facial expressions amusing. 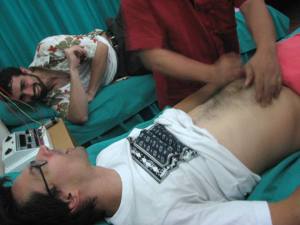 Then things got a little scarier: they put in some acupuncture needles and hooked them up to a rather dodgy-looking (if you ask me) little electrical device. 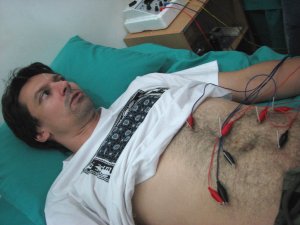 The resulting current made the needles jump rhythmically, as you can see in the video below. Chad found this interesting at first but then it started to get uncomfortable.

Then it was time for the fire. They covered Chad and Dave with a few layers of damp towels. Then they soaked the top towel in alcohol and torched it with one of those clicky barbecue lighters. 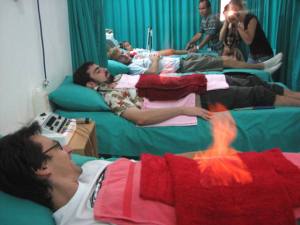 This part actually seemed rather pleasant. The “patients” reported a warm but not hot sensation on the skin. Chad found it refreshing and said he would do the fire part again. He didn’t look so eager to repeat the electropuncture experience. As for me, I avoid any kind of health treatment that looks like it could put me in the hospital. But the people seemed perfectly pleasant, and skilled, and I wouldn’t mind going back there for something less incendiary, like a plain old massage.

You can get Chad’s side of the story, by the way, at www.jakartachad.blogspot.com.

Frenchified names are definitely in vogue these days. If you want, you can go get a banana and chocolate crepe at the D’Crepes stand at any mall, and then buy the latest CD from Maliq n D’Essentials, followed by a beer at D’Place on Wahid Hasyim street (a stone’s throw from two Oh La La cafes). 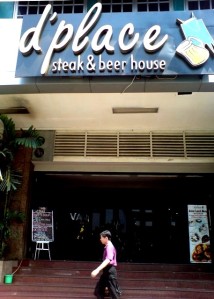 My favorite, though, is La’ Dunky salon, right around the corner from our apartment. I got a really great $2 haircut there once. Unfortunately, they’ve cut my hair three times …

That blue awning is not actually the salon, by the way; it’s a warung and motorcycle taxi stand. La’ Dunky itself is quite presentable. 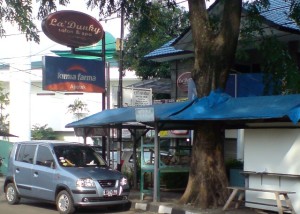 As Chad might say, it’s all très Fake French. 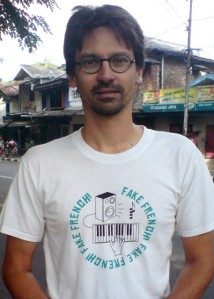 I was walking to the busway when I passed these guys pulling on a rope connected to something down in the sewer system. They were doing a one, two, three HEAVE! sort of thing, and whatever it was they were pulling on didn’t appear to be moving at all. 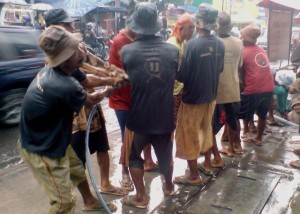 They’re all wearing hats because the rain was just pounding down; taking a break did not seem to be an option, at least in the boss’s mind. 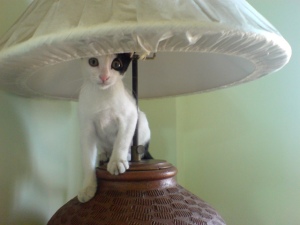 Susu has developed a fascination with the living room lamp, which often results in her looking like the embarrassing coworker who’s had too much to drink at the office holiday party.

I must admit, I thought the band Nidji was a big joke at first. Our downstairs neighbor Manoah became obsessed with their song Disco Lazy Time, because of its brilliantly bad English-language lyrics.

The goofy lyrics are a bit of a mystery, since Nidji – Indonesian, but named after the Japanese word for “rainbow” – managed to make decent sense in English in this song, Heaven. This became a theme song for the show “Heroes, but only in Asia, I think. (Heroes is pretty big here, by the way).

Anyway, after a few group-sings of their hit Hapus Aku (Erase Me) at karaoke clubs, I kinda got to like them. They have a cool retro-80s sound that older persons such as myself can relate to.

There are two odd things about this video, though:

1. The lead singer looks totally bored. I think he needs a cup of coffee. Or an acting lesson.

2. It’s curious that the song says Erase Me, but the one getting erased is the girl.

Anyway, here’s my translation of Hapus Aku. As always, improvements are welcome.

“Are you just going to blog about the kitten all the time now?” Chad asked after we got her.

“No,” I said defensively, “I’m going to blog about the kitten HALF the time.” 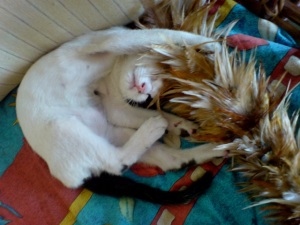 So, here’s the kitten. I worked till midnight the last two nights finishing the magazine, so I’m too tired to blog much. And I think she looks elegant with all those feathers.

Feather dusters are made out of the real thing here, and they only cost 85 cents, so I snatched one up as a cat toy. The only downside is the little bits of feather that get all over the house.

And here’s an earlier pic that I hadn’t gotten around to posting yet. 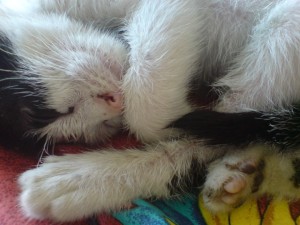